Amritsar is spread over the area of 50 sq. kms. with a population of over one million. The literacy rate is 50%. Amritsar, literally means the 'Pool of the Nectar of Immortality'. It is the major spiritual and cultural centre of Sikhs. The city, founded in 1577 by Guru Ram Das, the fourth Sikh Guru, is mostly inhabited by the Sikhs and Hindus. This Holy City is known for its rich cultural heritage of four centuries.

The main commercial activities of Amritsar include tourism, carpets and fabrics, farm produce, handicrafts, service trades, and light engineering. The city is known for its rich cuisine, and culture.

With its glorious heritage, Amritsar is proudly holding its status of an internationally known city not only historically but also in context of social welfare, philanthropic activity and higher learning. It hosts a large number of educational institutes, famous Khalsa college, GNDU, two medical and two dental colleges and IIM.

Places to visit in and around the city


Amritsar has an extreme type of climate with very hot summers and chilly winters. The region has four distinct seasons- the winter season (December to March), the summer season (April to June), monsoon season ( July to September) and post- monsoon season (October to November). Summers can be as hot as 46 degrees. During winters, temperature may drop down to sub zero. 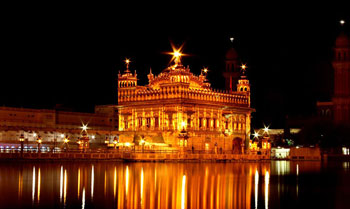 Golden Temple :
The Golden Temple or Har Mandir Sahib is the holiest shrine of Sikhs. It represents the distinct identity, glory, and heritage of Sikhs. It is among the seven wonders of the country. It is visited by over 1lac people on week days. Built between 1588 and 1601, the temple architecture is a combination of Hindu and Muslim styles.

The moment one hears the name of Shri Harmandir Sahib, a picture of very serene and holy starts appearing before one's eyes- the picture of a resplendent Harmandir- the Abode of God-gently wafting in the waves of the amrit sarovar (pool of nectar). So great is the sanctity of this place that every Sikh in his everyday prayers, aspires for and prays for a visit to this place 'Shri Amritsar Sahib Ji de Darshani Ishnaan'. One is left awe-struck when one first sees the brilliant Harmandir Sahib and hears the soft gurbani gently filling the air around. Automatically one kneels down, bows his head and words of the fourth Guru start resounding in the ears Dithe Sabhe Thaan Nahin Thudh Jeha ( I have seen all places, there is not another like thee.)