40% of female infertility is due to Anovulation

The most fertile time of the month is just before or at ovulation. Ovulation usually occurs two weeks before the period starts. The menstrual cycle of a woman varies from 24 to 32 days. To calculate the most probable period of ovulation, take the number of days in a usual cycle (from the beginning of one period to the beginning of the next) and subtract 14. For example a woman with a 30 day cycle would likely ovulate around Day16 (30-14 =16) while a woman with a 28 day cycle would ovulate around Day14 (28-14=14). To maximize fertility intercourse every other day around the time of ovulation is recommended (Day 10, 12, 14, 16, 18). This would increase chance of conception.

Anovulation is a condition in which ovary does not release a mature egg each month as a part of woman's normal cycle in her reproductive years. Naturally with no egg available woman cannot get pregnant. 40% of woman`s infertility is due to anovulation.

As today we better understand the ovarian function and reproductive endocrinology, in most cases the basic cause of anovulation can be correctly diagnosed, treated and cured.

Generally the extensive investigations are not needed. Putting minimum financial and time burden on the patient, decision regarding the cause of anovulation can be arrived at from collective findings of general physical examination of the patient, trans vaginal sonography and some biochemical tests. 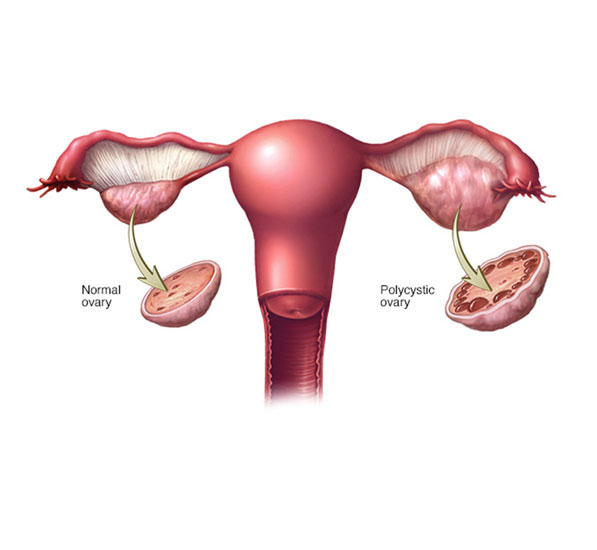 PCOS is a serious, common cause of infertility. 75% of anovulatory women are PCOS.After medication, ge8nerally the woman ovulates spontaneously. Pregnancy rates of 60-70% are achieved if attended properly.

Proper exercise is important to maintain a desired weight and general level of fitness. Reproductive disorders that result from excessive workouts can usually be reversed by making adjustments to the amount and type of exercise undertaken.

Lifestyle stress impairs fertility. There is a cyclic relationship between stress and infertility. The association between stress and menstrual irregularity has been established since Biblical times. Psychological distress has a particularly negative impact on sperm production. Endocrine changes are also reported due to psychological stress. Counseling plays an important role in the treatment to relieve stress.

TVS and FSH test are done for the confirmation of POF. Certain hormone can be applied to stimulate ovaries. Even then if no ovulation occurs Test Tube Baby with oocyte donation is a most logical option.