The management of fertility is one of the most important functions of adulthood!

Pregnancy, which is often deemed to be a relatively simple process - the union of egg and sperm, is actually extremely complex involving numerous steps. It starts with the release of follicle stimulating hormones from the pituitary (brain) to the implantation of embryo and to the development of feotus. The process may go wrong at any of the several steps involved causing delay in pregnancy or infertility.

Formation and Maturation of Sperm (Spermatogenesis)

In man the process of spermatogenesis (development and maturation of a sperm from stem cell) requires approximately 70 days and passage through the epididymis approximately another 12 days. Therefore, it takes almost three months for a sperm for complete maturation and to be available for ejaculate. The single ejaculate has an average volume of 2-5 mL. The number of sperm in normal semen ranges from 20-100 million/mL, out of which 30% or more are of normal morphology. The World Health Organization (WHO) suggests the following parameters for normal values, 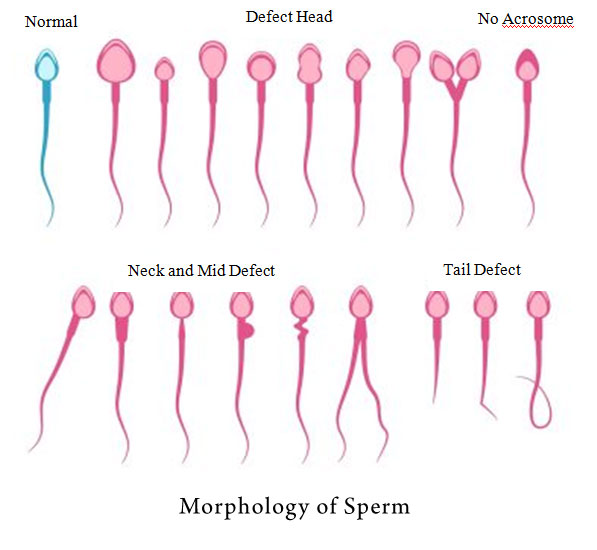 The rate of fertilization strongly depends upon the number, motility as well as the morphology of sperm in a particular semen sample.

As it takes nearly 90 days for the development, maturation and availability of sperm in the ejaculate, the results of any therapy will, therefore, be observable only after 3 months of treatment.

The essence of maturation of ovum is reduction of chromosomes to half. The oocyte is covered with layers of cells called primordial follicle. Some of these follicles are selected for ovulation every month to undergo maturation. However only one grows upto the size of 18-25 mm and is finally discharged from the surface of the ovary. This process is called ovulation. The oocyte is picked up by the fallopian tube. In relation to the menstrual period, this event occurs around 14 days prior to the expected period. However, some cycles may be anovulatory (when no egg is formed). It is noteworthy that ovulation may occur randomly each month from either of the ovaries

Fertilization is a phenomenon involving fusion of sperm with the mature ovum to form zygote. This event occurs in the fallopian tube. Fertilization can occur within 24 hours of ovulation. Sperm can retain the fertility potential in the fallopian tube for 48 hours after ejaculation. Out of millions of sperm deposited in the vagina, finally only 300-500 succeed in making their way to the ovum. It takes about 1 hour for the sperm to reach the site of ovum. Out of a bunch of 300-500 sperm only one succeeds in penetrating the ovum resulting into the formation of a zygote.

It is defined as the process by which an embryo attaches itself to the uterine wall and penetrates the epithelium first and then the circulatory system of the mother to form a placenta. A normal pregnancy is of course impossible without successful implantation and formation of placenta. Implantation of the blastocyst begins 2-3 days after the morula enters the uterine cavity. It burrows more and more inside the uterine wall. The penetration process is completed by 10th or 11th day. The implantation site is usually in the upper wall of uterus. 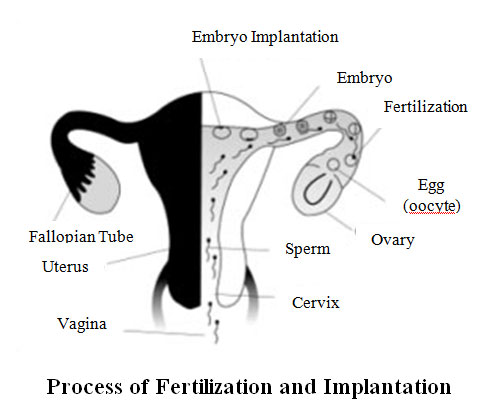